The most challenging IC that I’ve solder was a LT3463 booster converter that came in a 0.5mm-pitch 10-pin DFN package. Instead of pins, QFNs/DFNs have pads on the bottom so it’s a bit challenging to solder, inspect and de-bridge.

Thankfully, the MK22FN512VLH12 comes in a QFP package - pins instead of pads! This package also has a 0.5mm pitch but with a lot more pins (64 to be exact) - which means a lot more opportunities for solder bridges - fun!

I had some solder paste in the freezer and a newly purchased hot air rework station - so, when I found some time to put the board together, I didn’t hesitant one bit :)

My first attempt involved hand syringing four thin lines of solder paste onto the pads on the bare board and soldering the chip using a hot air rework station. My syringe job was poor at best. The lines were uneven. There was smudges. Even the hot air work was shoddy. I wasn’t sure what temperature to work with and probably ramped up the temperature too slowly.

The end result was a horrific mess of solder bridges and dry joints. I tried my best to patch it up - applied flux, reworked with a fine tip solder iron, removed excess solder with a wick. But in the end, I gave up after accidentally bending some pins. I could’ve probably bend them back but I decided the IC might as well be cooked by now :P

I rushed my first attempt and paid the price. So for my second, I gave it some planning.

I fired up KiCad and plotted a solder mask for our package and sent it to OSH Stencils. Their stencils are laser cut Kapton film in either 3mil or 5mil thicknesses. I order one of each.

Here’s the 2nd PCB in the stencil jig: 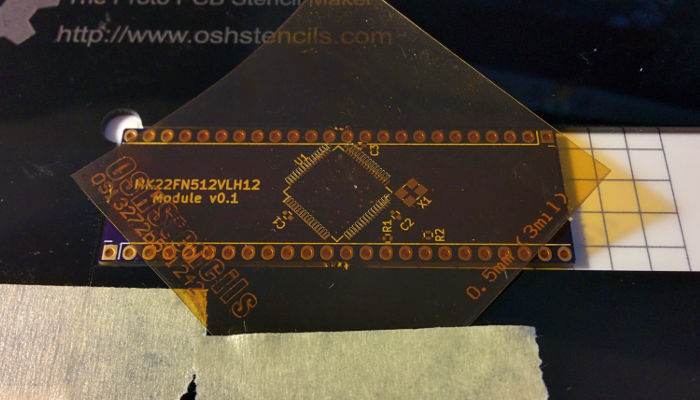 Soon after I took this photo, I swapped out the 3mil stencil and went with the 5mil instead. The 5mil stencil ended up depositing a tad bit too much paste - next time I’ll try the 3mil. The hot air reflow was straight forward - only a handful of solder bridges to clean with a fine solder iron tip.

I wished I used a fresh batch of solder paste though. The lot was months past expiration and have been through several freeze/thaw cycles. The solder beads probably were a bit too oxidized and didn’t reflow properly:

But this is only a prototype and everything tested fine with the multimeter!

published on February 16, 2016 in projects/Bitsy
comments powered by Disqus